How would you survive?

When you hear the word "Apocalypse" or "apocalyptic, what pictures come to mind? Zombies? nuclear war? Solar flare hitting the Earth or coming too close? Although I agree that you would be right to think about any of the above, what about if the National Grid where to go down? I mean off line as in power supplies to the whole country going off line? I dont mean for just a few hours, power could be out for 24 hours or even a few days, weeks or even longer. Global or National loss of electricity is only one possible scenario, there are many possible ways that SHTF, heat wave, arctic blast, pandemic, human error, stock market crash to name a few.

For the sake of this post I want to talk briefly about a loss of power, something that we all take for granted. We get up in the morning, get washed in warm water and put the kettle on, maybe make some toast while listening to morning radio, If the Grid were to go down, long term, we would soon become totally lost, no TV or internet, no mobile phones (Mobile networks are run on electricity), the food we keep in our fridge freezers would defrost within the first 24 hours 48 if the grid were to go down in the middle of winter.

The checkout tills in our shops as well as their freezers would not work, no light, no heating. Literally no power anywhere, unless youre lucky enough to own a generator. How would you survive? 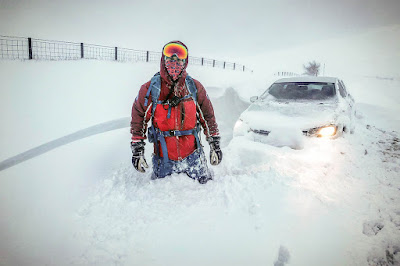 What would you think if I were to tell you that there are people all over the world who spend their time preparing for just such an eventuality. They call them selves "preppers". Maybe the first thought that pops into your head is that these people are just paranoid, survival nuts who spend their time building huge arsenals of weapons while storing masses of dried food and water in underground bunkers.

You could not be further from the truth, especially if you consider how in 2018 England was hit by an arctic storm named "The Beast from the East" which literally brought the whole country to a stand still for days, roads were impassable as the temperature dropped to -25 degrees C. Now, if you consider, we have winter every year and yet we, as a country seem to be totally unprepared for it, yes we could have a mild winter but then again, like this year, we might not.

Then there is America, America has had a horrendous few years with extreme weather conditions, as hurricane after hurricane hit them, New Orleans is flooded and much, much more..

Some of these preppers are getting ready for the coming winter and the possibility that this winter could be so bad that the grid does go down, might just be for a couple of days, but it could be longer, We could be only one disaster, away from the structure of society as we know it today, breaking down and if this were to happen, how would you prepare, should SHTF as preppers call it? Are you ready?
Posted by iJim at 20:07