Why I voted to Leave the EU

It is 8:35 on the morning of Friday 24th june 2016, a day that will go down in history as the day after the day that the people of Britain voted to leave the EU. David Cameron has just announced that he will be stepping down as Prime Minister, advising that we will have "a new captain" to steer us as a country into the future.

I should be happy as I was one of the people who voted for Britain to leave the European Union, but I am not happy.

It seems that now I and the others who voted to leave are being branded racists as we obviously based our decision on immigration, we, I have been called ignorant when I don't think that is the case.
I feel as though I need to justify my decision to vote to leave, so here it is. 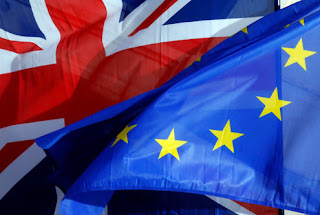 "I" personally don't like the idea of being lead by "invisible" people who I did not have a choice of voting into power, this decision was taken out of our hands by the powers that be, I believe that the EU has a main focus on corporate and business than on the people who live within its borders, borders where you can travel freely if you are a member state, which to me is a very dangerous situation given the current terrorist activities we have within our borders.
Not being part of the EU would in my opinion strengthen our borders, especially where the movement of terrorists are concerned.

I voted to leave as a way to make the UK governments accountable for the rules and laws that they implement, instead of being able to use EU legislation as a scapegoat.

Now on to trade, as I am typing this the head of the Bank of England is making a statement advising that the BoE has made contingency plans should the country vote to leave, thus giving us as a country a £250 Billion capital buffer.
Trade may be somewhat hard initially I agree, but now that we are no longer part of the EU we have the ability to talk with the likes of Australia, Canada and India regarding trading, something which we were not able to do in the past.

Immigration. When I voted one of the last things on my mind was stopping immigration, yes we have more control on our borders, this does not mean that we can close our borders but be able to say that we can accept so many million immigrants into our country instead of having this decision taken out of our hands.

It is my belief that Britain used to be a great and powerful country, I honestly think that we became somewhat if a weak country under the EU. Now that we have to stand on our own two feet, I believe that we can become a Great Britain again.

As for the Nationalist, racist idea. No, I am not a racist, not at all, I strongly believe that "Everyone" is equal, I hate the idea of injustice. Now that we are our own country, well once we have packed our bags and took our record collection back, we can start making moves to be strong again.