Our story began on Wednesday March 9th 2016. The time had come to take our little pup Sky to the vets to have a health check so that she could be booked in to be spayed. Both my wife and I are all too aware of the amount of unwanted puppies there are in the world and even though Gizmo our little Jack has been neutered we didnt want to risk anything.

The journey to the vets went without any incidents and we arrived there in plenty of time and sat waiting for Sky to be called into the vets room. After about 15 or so minutes and a little bit of confusion (there were two dogs called Sky) we were called in for the health check, after a bit of poking,  prodding and a thermometer put somewhere which gave Sky quite the surprize we were asked if she had eaten anything that morning, to which we replied "no" as our children had all had cereal that morning and Sky hadn't managed to steal anything.

The vet then called one of her colleagues into the room and asked "What do you think?" 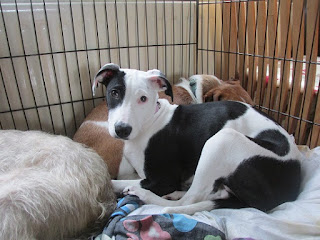 "Yes, I think she will be fine" came the reply as I bent down to tell Sky "It will be OK, there won't be any injections today"

The vet then turned to my wife and I and told us that they could spay Sky that day if we wanted. This came as quite the shock as we were expecting to wait a few days at least before her appointment, but no, it was to be that day, if we wanted.

We agreed to let Sky get her operation that day and after a short goodbye and see you later we left the vets... without Sky. Getting back into the car both my wife and I looked at each other and agreed that we were both guilt ridden for leaving her there.

Later that day I called the vets to see how everything had went and I was told we could collect her at about 4:30. I felt lousy, more so after I tried to record a video for YouTube by way of unloading my feelings of guilt, only to realise after the event that I had went through the whole video calling her Ruby, not Sky... Yeah, why don't you just pile that guilt on.

Sky is back home now and after a night lay on the settee sleeping everything off she is getting back to her usual self, though she is still taking things a lot calmer, obviously she is in pain, even though the pain killers have not fully worn off yet.
Posted by iJim at 10:54