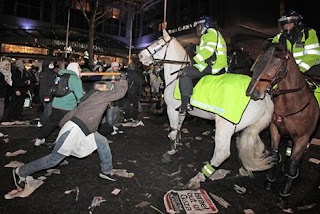 In the not too distant future, just as the autumn chill starts to be felt someone will be sat in a park somewhere in the South of England, they wont notice how the colour of the leaves are changing or even the cold. They will be too wrapped up on what has happened to them, confused over what has happened. Quietly they will ask "Why? What did I do? I was a good person".

They have lost everything, the last straw was when his wife packed a bag and left to stay at her mothers taking his daughter with her, she said she couldn't cope with the debt letters, the letters from the bank threatening to take their home from them. Then there were the letters from his customers and business contacts asking where their orders or payments were, letters advising of legal action seemed to hit his door mat almost daily.

Again the question "Why me?" falls from his lips, his business was doing well, yeah he wasn't rich but he could make ends meet, he didn't hurt anybody, so why did they burn his shop, it wasn't like it was a big corporation it was just a shop. The rioters took everything and then burned his shop to the ground.

He remembers hearing something on the news about a taxi driver pulling a gun on the police and how he was shot by them but what did I do? I didn't even know the taxi driver, the shop wasn't even in the Tottenham area...

...In the not too distant future, just as the autumn chill starts to be felt someone will be sat in a park somewhere in the South of England, they wont notice how the colour of the leaves are changing or even the cold as they pick up a shard of glass from under the park bench they sit on. Their head is full of questions as they hold the glass shard to their wrist and whisper "Im sorry, it wasn't my fault, I didn't cause any of this...".

At the moment the above "story" is just that, fiction, but in a couple of months time it could be happening or have happened.

It was just a matter of time before I posted something about the riots that are sweeping our country at the moment. Although if I'm honest I begrudge calling what is happening at the moment "Riots", Wikipedia has it that


A riot is a form of civil disorder characterized often by disorganized groups lashing out in a sudden and intense rash of violence against authority, property or people. While individuals may attempt to lead or control a riot, riots are typically chaotic and exhibit herd behaviour, and usually generated by civil unrest.

Riots often occur in reaction to a perceived grievance or out of dissent. Historically, riots have occurred due to poor working or living conditions, government, oppression, taxation or conscription, conflicts between Ethnic groups, food supply or religions Source.


Although, maybe in the beginning what is happening now could be classed as a riot, those involved were protesting about the police shooting a taxi driver. Although I don't agree with what happened after the shooting it happened, but what has and is happening since then is nothing more than mob rule fuelled by greed and the "Me, Me, Me" culture we have today.

I have heard people saying that these are Feral kids who are doing this, again I have to disagree with this. Even feral animals have some sense of order and right from wrong where as these low life's have nothing like this. I cant even bring my self to call these things Animals as that would be degrading to animals. There is no excuse for what is happening now, NO excuse.

Some of the scenes that I have seen over the last few days have if I am honest left me sickened and lost for words that a human being could be so heartless as to do these things to other human beings for nothing more then self and greed. It is enough for me to say that because of what is happening in England at the moment I am ashamed to be classed as British. My Brother on the other hand has put into words what most decent people are thinking right now. If I may I want to quote my brother by saying..

1. The current government are conservative. You probably wouldn't know this because its likely you didn't vote. It's quite easy as you just put a little X next to a name. Maybe try it next time and then you can complain if your choice didn't get in.
2. You state you are showing the rich you can do what you want? Sole traders on the high street are not rich. Like many in todays climate many are scratching to make a living while you likely over claim on the benefits system. Large retailers on the high street are also struggling and many have closed down all together (remember Woolworths? Borders Books? actually, you wont remember that last one...) or have closed a number of stores.
3. You claim lack of opportunities. Well done, absolutely well done. By destroying local business the number of opportunities has just decreased further.
4. Dont say this is about race. Dont say this is just blacks or whatever. This is about one section of society of all colours. It's about respect and lack of it. Lack of self respect, lack of respect for others. Lack of pride in where you are from. Lack of any moral fiber and more than anything, lack of intelligence.
5. Dont talk about being hard done to. I was brought up in a rough area. We played in our garden and no further, struggled to make ends meet. Did I carry on like this? No. I got my head down and tried to make something of myself. See point 4.
6. I've seen an injured man have his backpack robbed. I've heard a woman who's house was broken in to. I've heard business that have been around for 100 years go up in smoke. I've seen cars burned, bus burned, houses, shops all burned. You do not have the intellect to select your target, it is random and it is senseless. You have no argument for doing this. Nothing. You are the lowest of the low, you are scum.
7. Lastly, though many of you wont know this, it all started as a demonstration against a man who was shot and killed by police. In my opinion it was fair for these people to demonstrate peacefully. However, I do not understand the point that the police need to wait to be shot at first? If a man is armed I want the police to stop that man causing harm to anyone. Police or civilian. They need to act before that person does. I do think a shoot to kill policy needs to be looked at and perhaps another method could be used to disable the person. However, here is a tip from me. Don't get in to that situation to begin with. If you carry a gun or a knife or if you even walk around with the intent of causing harm, then you line yourself up to be harmed. There is a saying, Live by the sword, die by the sword. How true it is".