Deported Paedophile in the UK 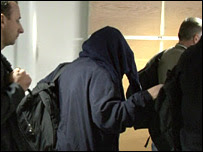 A serial paedophile who is back in the UK after being deported from Australia at the end of a 12-year jail term is to be put on the sex offenders' register. Raymond Horne will face the same monitoring arrangements as those who offend in the UK, the Home Office said. Horne, 61, reportedly moved from the UK to Queensland with his family in 1952 and started offending in the 1960s. Queensland authorities said they were "well rid" of Horne, who would have needed close supervision had he stayed. I know this has been in the news quite a bit today but I had to write something, I found this on the BBC News site , Click "here" for the full story. The article goes on with a comment from a Home office spokesman who said "The UK's monitoring systems for sexual offenders are some of the most robust in the world". I seem to remember making a post called "Missing 322 Sex offenders" covering a story I found about so many hundreds of these animals being lost or not at the address` they had given when entered on the sex offenders list. So, after loosing over 300 sex offenders how can the home office claim that The UK's monitoring systems for sexual offenders are some of the most robust in the world. Here we see just another reason why I should worry about the safety of my children as another animal with a record of child abuse spanning nearly half a century is given free reign to wander the streets of England unchecked. All I can say is, that it is a shame the bag over this things head is not held in place by a noose.