First of all lets get the facts. There are at the moment three different types of flu, they are Seasonal, Avian and Pandemic flu. The differences between the three are Avian flu is a disease which mainly affects birds. Seasonal flu is the viruses that effects the human population and cause widespread illness each winter. Pandemic flu occurs infrequently, when a new influenza virus emerges which is markedly different from those recently circulating in the human population, causes disease in people and spreads easily between people because they have little or no immunity to it. This could happen through an avian flu virus (such as H5N1) mutating into a different strain with greater affinity for people.

There really isn't a definitive answer as to were Avian Flu originated , a variation of bird flu has probably been around since the dawn of humankind in one form or another. The first known avian influenza virus was identified in Italy in 1878 as a “serious disease of chickens”. For more information on the origins of Avian (Bird) flu click "Here"

At the moment the authorities say that they do not know when Bird flu will hit the UK. saying: Intervals between previous pandemics have varied from 11 to 42 years with no recognizable pattern. Three influenza pandemics occurred in the last century – 1918/19 (Spanish flu), 1957/58 (Asian flu) and 1968/69 (Hong Kong flu). All affected large numbers of the population, causing many deaths and huge economic and social disruption. Experts are concerned that the H5N1 avian flu virus, which has gained the ability to pass from birds in order to cause disease and death in humans, may emerge to form a pandemic. They say that it is a probably that it may take less than six months and possibly just a few weeks or even less for avail flu to reach the UK, but this will depend upon where the pandemic emerges. Of course, it is important to remember that the pandemic could emerge in the UK. The increasing speed and volume of modern travel means infectious diseases can travel very rapidly around the globe. 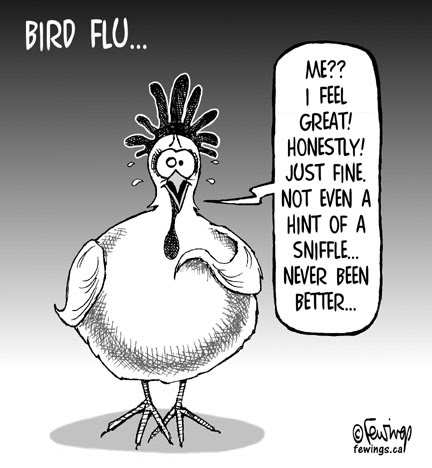 Who is at risk? Getting to basics the Avian (H5N1) virus is not fussy, anyone and everyone is at risk, not just the young and the old. The virus is easily passed from person to person by breathing in air containing the virus produced when an infected person talks, coughs or sneezes, yes it is airborne . It can also spread through hand and face contact after touching a person or surface contaminated with the virus. Pandemic flu is likely to cause the same symptoms as ordinary flu but the symptoms may be more severe because nobody will have any immunity or protection against that particular virus. Click "Here" for Key facts about Avian influenza (Bird Flu) and the avian influenza A virus (H5N1).

So boys, girls and those of mixed or no gender, you might be asking why have I shared this new found wisdom with you? Well the UK government today (Thursday 16 August 2007) have secured supplies of vaccines to counter human influenza caused by the bird flu virus which is worth about 155 million pounds sterling. Who are the lucky winners? Two drug makers have a four year deal, they are GlaxoSmithKline (they make Beechams powders) and a U.S Group Baxter International are now committed to supply a Pandemic Flu vaccine as soon as the strain is identified and made available by the World Health Organization. Now we all know what kind of wonders in modern virus antiagents can be created when American Animal research laboratories team up with Laboratories from the United Kindom, Just look at Pirbright and Merial. GlaxoSmithKline, Europe's biggest drug maker, signed similar agreements in 2006 with governments in Switzerland, Iceland and Denmark to supply its vaccine in the event of an influenza outbreak, which many experts fear may be triggered by bird flu.

Again I am thinking that there may be more going on than we are being told, why are governments stockpiling vaccines. Is there something which we are not being told? We all know how our loyal governments like to play things down, saying that things are not as bad as they seem while they all form an orderly queue making sure they are first to be vaccinated against any threat of any biological entity. I am interested to see how far avian flu reaches its claw into the UK and how many people die before we are given a glimpse of the severity of the issues we are facing
Posted by Jim at 00:17

Email ThisBlogThis!Share to TwitterShare to FacebookShare to Pinterest
Labels: Health and Fitness, Journal