And what better way to do it than in the age old YouTube 10 things about me format.

1: When it comes to horror movies I admit it, I am very anal, somewhat if a lore Nazi.
I hate it when movie writers and producers change a character's lore and history just so that it fits in with their movie idea.
Example, vampires burn, explode and die if they are exposed to sunlight, no they can not have this magical ring passed down through the ages that allows then to walk in day light and no, they do not sparkle a bit.
They explode and die. In gaming circles thus is called God modding and is frowned on, what's more I don't like it at all, it's just lazy.

2: The first horror movie to scare the crap out of me, well OK there were 2 of them.
They were The Thing and Night of the Lepus 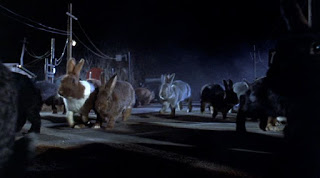 3. Almost all my dreams are what most people would call bad dreams or nightmares, the majority of them are set in a post apocalyptic world over run by all kinds of strange beasts.

4. I wanted to make a podcast over 10 years ago, the idea was I would add audio to my blog posts so that people could listen to my posts instead of reading them.
Unfortunately I found YouTube first and started vlogging

5. I have spent nearly all of my life looking for the ultimate horror movie that would scare me to the point of not being able to sleep again just like Night of the Lepus

6. Ok, in the late 1990’s I was diagnosed with depression and what is now known as Generalised anxiety disorder. I am managing to keep both under control now that I am spending less time around technology and spending more time out doors

8. I don't own a since Apple product, and the I in iJim was actually inspired by the love of zombie movies and is short for infected, so my full name would be infected Jim or iJim for short.

9. In the world of zombie tv shows the leaders have ro be The Walking Dead and ZNation.
I like ZNation better.
Why? Well for one, whether it is just me and the ZNation fan base is much smaller but the cast and crew of ZNation are a lot more a give on social media, answering questions and interacting with their fans, he'll I even have a few of the ZNation cast and crew following me on Twitter.

10. If you having guessed all ready I like post apocalyptic horror movies and zombie movies, I don't like the gore for the sake if gore movies, There has to be a story line preferably one which doesn't involve 5 or more teenagers on a spring break who go off to their uncles cabins in the woods, you know what I mean.

I think the exception to this would have to be Evil Dead which deservedly has earned the term of a  it classic.

So there you have it, 10 things about me. Now that you know me a little bit better how about you tell me something about you..