What Kind Of Role Model?

There are those who will break the law under cover of the night, then there are those who break the law when you are not at home or while being very sneaky behind you while trying to pick your pockets or get into your handbag then there are some who are just down right blatant but this weekend we saw The most blatant scene of criminality that I have seen in almost two decades.

Of course I am talking about the destruction and subsequent looting of a Lidl store over the weekend. 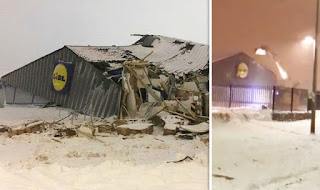 Someone stole a digger from a building site and literally demolished one side of the a Lidl store allowing access, as you can see from the picture above, but this is not the end of it and it's not even close to why I am beyond shocked.

When I first saw the footage on the TV I was speechless, gobsmacked and astounded, even now, three days later I am at a loss for words.

Not content with the standard petty shoplifting, someone stole a building site digger with the intent of ripping the side off a shop so that they could steal from it.

The worst part in all of this was the pictures of children running away from the store with arms full of what ever they could get. 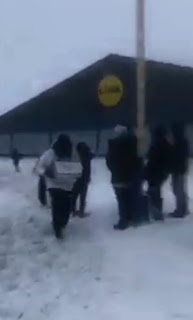 As if the "Shopping for nothing" epidemic a few years ago wasn't bad enough, it is obvious that the kids, yes kids, children who were involved do not have any kind of role model to look up to, and little if any guidance in their lives, otherwise they would not think that looting a store is a good idea.

Even in an apocalyptic world I would feel bad about taking anything from a shop without paying for it but these people seem to think that doing something like this is an acceptable way to spend a Saturday evening.

I ask you, as a society have we really come to this? Where children, kids who know that they can not be arrested due to their "tender" age, think that they can do what ever they want and not have a consequence to face? Well obviously there are some children who think that this is the case. 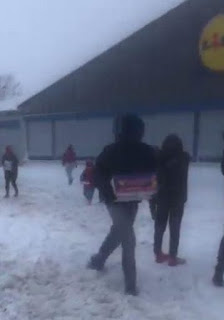 The upside is that at the last count 8 people have been detained by the police in regards to this. No doubt the numpty who decided to post his adventures on Snapchat was one of the first to be picked up.

Edit: I suppose one reason that I am so dumbfounded by the actions of the people involved is their shear lack of conscience, they don't care about anything except their own betterment in the short term. "I have took this and I am going to eat, drink, sell it for my own personal gain and screw the shop, its staff and whatever happens to anyone because of what I have done. I'm ok and that's all that matters".

A mindset that I will never understand.
Posted by iJim at 09:28