How To Reduce The Prison Population.


Every now and then I come up with an idea that to many might be a little bit out there, a bit outside of the box so to speak. A few years ago I had one of these ideas, a surefire way to not only reducing the prison population but, a way to create employment and help local businesses at the same time.

Looking at the world we live in today there seems to be a set of people who think that they are above the law, kids running riot in our streets who think that because they are under 16 years old the law can't touch them, drug related crime, knife and gang related crime, bullying, shop lifters and those who fiddle the state the list is endless. Our prisons are over crowded with petty criminals who are costing the tax payer hard earned money to keep them at the Queens pleasure, but, not to worry I have the solution. Bring back the town stocks. 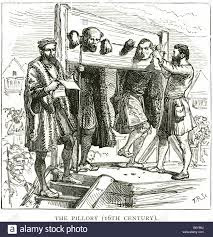 Now I know there are people out there who think this would be against their Human Rights or inhuman but I would argue that the crimes that these people have committed are just as bad if not worse. I'm not talking about hanging, stoning or even burning at the stake, god knows we have been there before, public humiliation is the way forward. No, I kid you not I am deadly serious, in a world where image seems to be everything this type of punishment would be quite fitting.

The Plan: As well as warning off prospective petty criminals and social nuisances, we should consider the jobs that the stocks would create. Obviously the stocks would be run by the local authorities but, we will need people to maintain the stocks as well as fit them, we will also need people to clean up the mess left around the stock site after the public humiliation has taken place. Costing would be low as the fruit and veg can be supplied by local supermarkets and once used the waste can be given to local farms or community garden projects to act as fertilizer so returning them to source.

As well as deterring would be toe rags, the community as a whole would benefit from two or more sets of public stocks in every town centre coupled with the fact that if the Stocks were reintroduced into the legal system in a short space if time the prison population will be drastically reduced, saving the tax payer money that could be better spent else where.
Posted by iJim at 20:40