So its the Queens diamond jubilee this weekend, whoop-de-doo. The whole country seems to have gone Royalty and The Queen mad, well except for here in the House of Jim, where no bunting is fluttering in the wind, no red, white and blue cupcakes have been baked or bought and no Union jacks can be found. We are a Jubilee free zone. 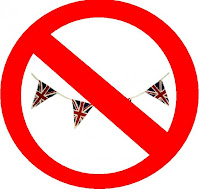 Way back in ancient times (Just before colour TV was invented) people would say Wish we had a colour TV that you could tell how honourable and good the countries rulers were by the happiness of their subjects and the economic health of the country. With that in mind and the economic recession we are in, going into a double dip, I would think it is safe to say that our rulers are a bit rubbish.

My wife is of the same ilk when it comes to the Royal family, well, with the exception of the Prince`s William and Harry who "seem" to be more caring and open than the rest of the Royals, saying that though they were born from a caring woman. With any luck they will continue to follow in their Mothers ways and not be effected by their Fathers genes.

As for the Bank holiday we have been granted, well thanks a bunch Queeny but it means nothing to me as my kids are off school anyway for their half term holidays and I am out of work at the moment so the bank holiday is just another day for me.

Anywho, I will be spending the Jubilee weekend and bank holiday doing everything I possibly can to avoid the celebrations on the TV and anywhere else for that matter.
Posted by iJim at 05:24