That caught your attention, the title of his post is in fact not true. I am not gay, but what if I was? Would it really matter at all? I don't think that I personally would change, unless of course I lived in America in which case I would not be recognised as married in 30 or more states in America due to the May 2012 passing of North Carolina's gay marriage ban.

Today is International Day Against Homophobia. I admit I don't know a lot about "IDAH" having only been introduced so to speak by a relation. I know I am against Homophobia and as some of you might know am very big on equality for everyone with no exception. Anyway I am rambling, if you want to know more about IDAH click here. 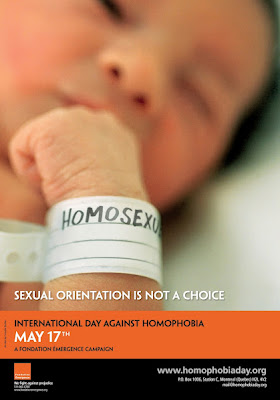 I did intend to make a video post about this after seeing vlog posts by both the Vlogbrothers on YouTube about this very subject which you can see here with Hanks post "Your Arguments Are Invalid: Gay Marriage" and here with John`s follow up post "Religion and Gay Marriage" but with one thing and another I just have not had a chance to record it (maybe I will try in the next day or so). Anyway this is what I think.

So lets just mix things up a bit and imagine that society or parts of it look on marriages between left handed people as being unnatural, people with ginger hair can not vote and people who are found out to not like brussel sprouts run the risk of loosing their jobs. Disabled people are not allowed to hold down full time jobs.

I honestly can not even begin to understand what the problem is with two people who love each other wanting to get married, especially in today's society where marriage is not such a bit thing any more. You would think that the church especially would be shouting from the roof tops with joy about people of the same sex being able to wed given that it is the church who bleat on about the sanctity of marriage... Unless the couple getting married are of the same sex? Aww come on people what is the big deal?!

I just cant accept the "But the Bible..." argument either, to be honest I find it difficult to even see how the Church has the balls to say that same sex marriage is unnatural and wrong given the stories of abuse and the like commited by members of the same church, who was is who said people in glass houses and all that?

Gay and same sex relations are not an unnatural happening in nature either with over 15,000 species known to have gay tendencies so the "Its unnatural" argument is is not a valid one.

Finally, as I think this post has gone on long enough, I would like to end as I kind of began with the May 2012 passing of North Carolina's gay marriage ban enacted in America, The Land of the Free (unless your gay and married or looking to get married).
Are you, the people who pushed this legislation through aware that you are in violation of Article 16 of the United Nations Human Rights Act? Yeah you know.. No? OK Here is a link to the United Nations Human Rights Act  and here is Article 16.

Article 16.
Forgive me if I am wrong but a married couple are still classed as a family whether they have children or not.

In case you forgot America joined the UN on 24th October 1945.
And finally (for real this time) a quick message to Hank of the Vlogbrothers: In your closing argument on your post linked above where you talk about how grey the world really is and how there are no set lines in nature, you missed a VITAL chance to use the now famous line stating that "There are No Edges".
Be Awesome.
Jim