Its taken just short of three weeks and our kitchen is done, well if you dont count a missing draw which is getting put in on Tuesday coming and the decorating its done. Three weeks ago the builders or builder moved in and ripped our kitchen units and sink out. We were left with an empty shell while the same builder skimmed our walls to cover the mess I had made a few years earlier when I was let loose with a bucket full of plaster.

Like I said in my Kitchen Woes post we had to wash any dirty plates and cutlery in the bath for what turned into a week or so. By the end of the first week we had part of a worktop and a working sink, although for the first night the water drained into a huge bucket under the sink. A few weeks on and countless bacon sandwiches from the local shop later and we have a nice new kitchen. 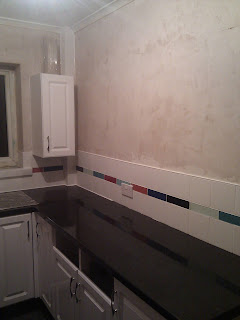 After spending the better part of today trying to figure out what can go where in the cupboards. We are done, well except for the decorating of it which is proving harder than we thought, especially when it comes to choosing a colour for the walls. A job which is usually left to my wife because I have no colour sense when it comes to decorating and to be quite honest I am totally pants at it. So, it looks like for the moment anyway we will be looking at plain plaster walls, but at least we have a nice new working kitchen.
Posted by iJim at 09:22